I already posed an update on Carnivore, the network traffic visualization tool first launched in 2001 and currently usable as a library inside Processing. Carnivore is up and running -- so happy coding! 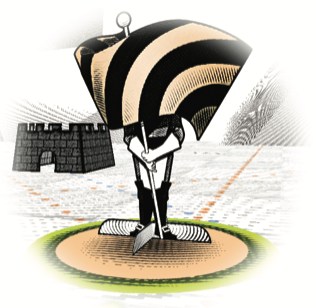 Kriegspiel is a different beast entirely. As a digital reinterpretation of Guy Debord's 1977 tabletop game, I was happy with the original beta. But the code gradually became obsolete and the game is offline at the moment. In retrospect I can see some problems in how it was conceived and designed. The application was just too bloated. It relied on a 3D graphics engine that was overpowered and unnecessary for what was needed. Online play relied on a large networking library (itself now discontinued), which was unwieldy. Trying to keep it all up and running on three platforms, plus hosting a server, was hard to pull off. Truth be told, Java was probably not the right choice from the beginning. There have been some notable games written in Java. But the vast majority of game coding is done in languages like C++ that compile to native instructions.

I'm going to try to rewrite the game from scratch using Apple's new language Swift. The goal will be to rebuild Kriegspiel and release it for iOS and macOS. I'll be using SpriteKit, GameplayKit, and hopefully Game Center for multiplayer. Major changes will include: the addition of single-player mode using AI; elimination of the 3D view; and general streamlining to eliminate unnecessary add-ons and features.

I know what you're thinking: Guy Debord is turning in his grave. Indeed, the very act of porting Situationist code to the iPhone or iPad seems somehow misguided, somehow wrong. As an inveterate hater of iPads, I've wrestled with this myself. But times change, and there's no reason why this game shouldn't change as well. Indeed, throughout the project, the working assumption has been to preserve the rules of Debord's game without necessarily preserving the particular social and cultural context in which it was originally designed and released.

In collaboration with Mushon Zer-Aviv who created all the art for the game, I decided from the outset that this new staging of Debord's game rules would have to migrate to today's environment. For instance, we jettisoned Debord's abstract aesthetic for a more iconographic approach rendered in Mushon's inimitable style. It seemed to work better within the context of computer games.

With any luck this should all work, and Kriegspiel will be back online soon. (Translation: “when it's finished.”) I'm not assisted today by some of the excellent coders that helped me with the beta version. So it might be slow going. But I think I can manage it. Until then, here's a sneak peek...