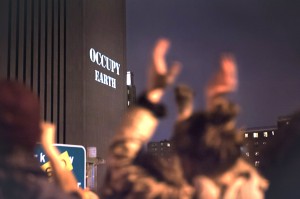 Remember back to a moment of great energy. Remember back to the Occupy movement of a few years ago. During one of the larger marches, when protesters were quitting the island of Manhattan across one of the major bridges, a huge image appeared on the side of a nearby skyscraper in full view of the marchers. Like an angel casting its rays over the cops and the barricades, the beam projected images and slogans in solidarity with the Occupy protesters.

We live in an age of radiant surfaces. Electronic billboards are ubiquitous along roadways, and many modern cities are populated with buildings clad in LED displays, synchronizing video with architecture. But the Occupy beacon was a projection, not a video monitor. And this particular skyscraper is different from those flashing their visual spectacle to the urban landscape. Not the light boxes of Times Square, this is an architectural black box. It works well as a screen because of one unusual detail: this building has no windows. From the outside it appears austere and uninviting precisely because it has no outside to speak of. It works well as a screen because, ironically, it's so stubbornly resistant to interfacing with the outside world.

As a structural device, the black box has an interesting history, but where to begin? There is the camera obscura (the “black chamber”) which is quite old. And there is of course the common photographic camera, itself a black box that remediates the camera obscura. Recall too Thomas Edison's famous Black Maria, the first movie studio in America, which pushes the form one step further, a macro black chamber to house the micro black chamber within. In programming, the method or subroutine also functions like a black box, as do libraries and other services accessible via an API. And scholars like Philipp von Hilgers and Peter Galison have helped write the history of the black box, locating it, as von Hilgers does, in the technological and military intrigue of World War II.

Here, in a footnote to the 1961 preface added to his influential 1948 book Cybernetics, Norbert Wiener offers a concise definition of the black box:

"I shall understand by a black box a piece of apparatus [...] which performs a definite operation [...] but for which we do no necessarily have any information of the structure by which this operation is performed." (p. xin1)

Across all of these many investigations into the black box a number of key points emerge: a black box performs a definite function; yet it is not known how the function is performed; one only knows that it is performed, via access to the inputs and outputs of the box. Black boxes thus realign the forces of the world according to a functional arrangement with strict proscriptions governing legibility and knowledge.

A building with no windows? A building with no inputs and outputs? Not entirely windowless, in fact the building has thin strip windows covering part of the facade. It is one of two important architectural black boxes built in New York City in the 1970s. Rising in 1975 above Pearl Street near the foot of the iconic Brooklyn Bridge, the building is a tall lump of limestone with slim windows slicing vertically through an otherwise austere facade.

The Pearl Street building is an unusual skyscraper because it is a telephone building, not an office tower. Inside are nothing but telephone switches, connecting and routing terrestrial calls going in and out of lower Manhattan. The building seems uninviting for a specific reason. It was built to house electronics, not people.

In many ways it mimics similar structures existing in municipalities and rural communities around the world. This being New York, the Pearl Street building was designed as a skyscraper, making it somewhat unique, but it is just as industrial and anonymous looking as other phone switch buildings existing elsewhere. Telephone buildings appear in all manner of styles, from small structures in residential communities made to look like normal houses (complete with fake windows), to large sheds in industrial zones.

A year earlier, in 1974, construction had been completed a few block away on what came to be known as the AT&T Long Lines Building, a hulking granite-clad and windowless monolith designed by John Carl Warnecke & Associates. Despite its uninviting exterior, a local critic praised the AT&T Long Lines Building at the time, calling it the most well designed of all the telephone company's windowless equipment buildings:

"The Warnecke building is surely the [telephone] company's best. It is windowless, as most of the new equipment buildings are, but rather than resorting to a plain box, the architects here evolved a powerful new form from the new equipment function, in which huge exhaust-hood openings for mechanical equipment and microwave communications equipment dominate the facade."

A slightly different approach to the architecture of the period is evident in these buildings. There are stylistic references to brutalism, particularly in the AT&T Long Lines Building, which was erected out of prefabricated cement panels and finished with a granite skin. The several huge exhaust-hood openings at the top of the structure add to the brutalist aesthetic. And while, strictly speaking, brutalism signifies raw concrete, the building also embodies many of the cultural meanings that brutalism came to signify, including a hulking exterior, weighty materials, and a sense of austerity uninviting to the human form.

We have here, then, an offshoot of brutalism that finally makes design sense, an “informatic brutalism,” forged from raw cybernetics not raw concrete, and designed to keep the information systems in and the people out. These buildings are raw for a reason. These buildings have no intention of appealing to the human form in the first place.

Unlike the praise given to Warnecke's building, contemporary critics slammed the Pearl Street building, calling it “one of the phone company's most conspicuous design failures. [...] a beige box...[that] sets a tone of utter banality.”

But this beige box is really a black box. Rising high above street level, these technological containers cannot be penetrated or accessed normally from the outside. In the age of homeland security, black box buildings are intensely monitored and securitized by both human and technical safeguards. Yet, at the same time, no other buildings have more inputs and outputs. No other buildings are as promiscuous with their surroundings. Colossal amounts of data flow in and out of these switch interchanges all day and all night. To gain access, don't walk over to the entrance gates, simply place a telephone call and you're right inside.

What do these architectural black boxes teach us about the black box in general? First is the principle of partitioning: a technical field can be partitioned into systems and subsystems, creating a structural arrangement of the field.

Second is the principle of functionalization: once partitioned, each subsystem can be understood in terms of a function containing an interface.

Third, and building on the previous two principles, is the principle of selective obfuscation: given a system and a subsystem, the system is defined as that which is translucent and legible, while the subsystem is defined as that which, beyond its immediate legible interface, is otherwise opaque and illegible. (Recursion applies here too: any subsystem becomes legible within its own scope, and will itself have a further layer of opaque subsystems with which it interfaces. Likewise any system simultaneously serves as the opaque subsystem of some other larger system.)

These architectural curiosities reveal the essence of the black box: connectivity, but only under strict conditions; high bandwidth throughput, inside a low bandwidth profile; unprecedented quantities of data, and unprecedented curbs on legibility.