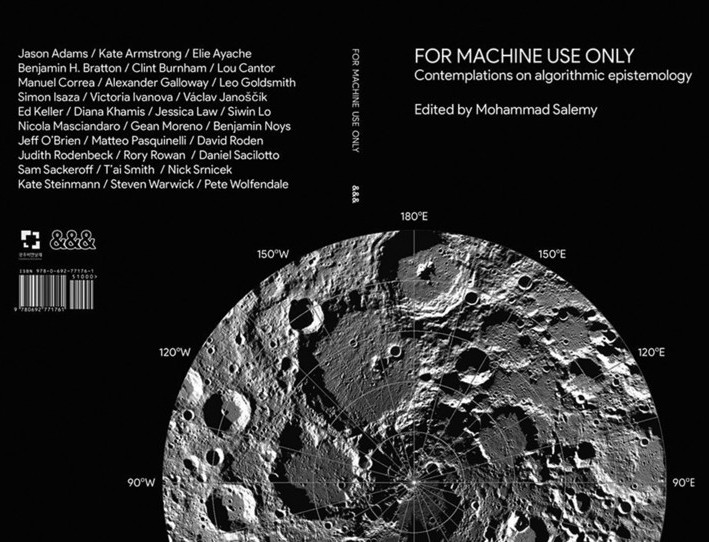 The following short text appears in a new volume titled For Machine Use Only, edited by Mohammad Salemy and published by &&& / The New Centre.

Computers are very good at putting things to work. So it's no surprise that images have been activated by the computer, the erstwhile passivity of all renderings now made active and useful. Still, what's interesting is not so much that an image can furnish useful answers, but that an image can be a question, and a good question at that. Shall we not wonder what sort of question is asked by the image? Or the reverse, to what question is the image an answer?

A question that can't easily be articulated. Words and grammar are well suited for precision, for marking causality, for the trajectory of a narrative, for the enumeration and itemization of things. An image asks a question that involves multiple points of focus, a question with an organic complexity in which several issues are at play.

A question formed by gestalt. Analysis is the art of breaking things down into discrete units and deducing the operations of the whole from such genetic elements. The question posed by the image, by contrast, is entirely synthetic. Images rely on a holism in which the total field conditions each and every specificity. An image asks: what sort of thing is a unity?

A question that is abstract (not particular). Searching on a snapshot of my lover will not return other intimacies from my life, but rather an obscene confusion of foreign facsimiles. An image will yield the generic abstraction of a thing. An image uses the specific engraving of an event as a bridge toward the general phenomena of the world.

A question that is formal (not content-bound). Shapes and relations, a gradient of color, the abrupt change from one texture to another--these are the things captured in pictorial language. Symbolic discourse is an army of adjectives. But the image mathematizes language into geometric curves and continuous formula. The image is a space of composition first and foremost, prior to any scenic depiction.

Images elevate all these things--complex articulation, holistic gestalt, generic abstraction, and formal composition--over other kinds of expression. In this way images reside in a distinct aesthetic enclave, a space maintained from the oldest cave paintings, to the Renaissance and Baroque, to the most refined twentieth-century abstraction. The computer has merely operationalized the elemental capacities of the image. Thanks to the computer it is now easier to see the kinds of questions asked by the image and, even more fascinating, the kinds of questions to which an image might provide the answer.