(Here's also a podcast of the recent panel discussion between me and Shaviro hosted by the New School on Nov 7th.)

With the recent publication of The Universe of Things: On Speculative Realism, Steven Shaviro confirms his status as one of the most interesting speculative realist au 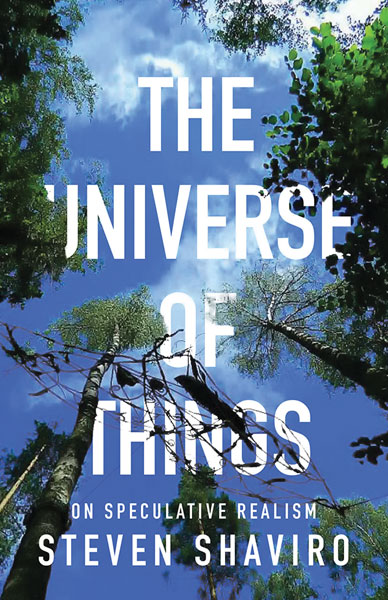 thors. In a philosophical field littered with mines and booby traps, characterized by antagonisms and growing factionalism, Shaviro has managed to produce a very lively book filled with equitable and generous readings of dozens of authors. He's certainly the most diplomatic author working in speculative realism today, while still pursuing a particular line of argument all his own. The book is filled with creative and insightful observations on a number of different contemporary debates and conversations. Yet at the same time Shaviro has carved out an original set of concerns and proposals for the future of speculative thinking.

As I see them, the three basic contributions to speculative realism made by Shaviro are (1) connectionism, (2) panpsychism, and (3) aesthetics as first philosophy.

The most important philosophical influence on Shaviro is Alfred North Whitehead, and this new book should be read in the context of Shaviro's 2009 book on Whitehead, Without Criteria. From Whitehead, Shaviro adopts the notion of “prehension” or what Whitehead called the concrete facts of relatedness. Owing much to Henri Bergson and Baruch Spinoza before him, and finding a philosophical affiliation with Gilles Deleuze after him, Whitehead gives us a connectionist or relationalist ontology rooted in notions of process and becoming. Shaviro positions himself within that lineage, and it forms the basis of his unique brand of speculative realism. Thus, one might describe Shaviro as essentially the Whiteheadian speculative realist, whereas for others in the movement the key influence might be Deleuze, F.W.J. Schelling, François Laruelle, or someone else entirely. In practical terms this means that Shaviro defends a connection-based rather than entity-based ontology.

Shaviro's own unique contribution begins to gain momentum in Chapters 4 and 5, where he explores panpsychism, the thesis that mind or mentality is common to all entities in the world, or as Shaviro puts it “the thesis that even rocks have minds” (85). Giving equal play to philosophers like David Skrbina, Thomas Nagel, George Molnar, and Galen Strawson, Shaviro moves steadily toward his ultimate goal, the ubiquity of mentality. “Once we understand 'thought' in Whitehead's deflationary sense, rather than in Kant's grandiose one, we discover that it is everywhere rather than nowhere” (82). Panpsychism, then, offers a new way to escape from the correlationist circle, because “[p]anpsychism...undoes the Kantian knot of thought and being. A thought that is immanent to being is very different from a thought that must be correlated to being” (82).

Still, what would it mean to have a thought not correlated to being? Chapter 6 on “Noncorrelational Thought” begins to answer the question. The chapter culminates in a very solid reading of Laruelle--which is something of an achievement given that, except for Ray Brassier, Shaviro is the only mainline speculative-realist author yet to do so. And this is what Shaviro gets exactly right: his own tête-à-tête with Graham Harman notwithstanding, the key dynamic in speculative realism today is actually between Quentin Meillassoux and Laruelle. “There are intriguing parallels between Laruelle's approach to standard philosophy and Meillassoux's critique of correlationism,” he writes. “[B]oth Meillassoux and Laruelle see the philosophical attempt to think reality in correlational terms as the consequence of an arbitrary decision” (128). Indeed, the two most rigorous attempts to escape the correlationist circle are furnished today by Meillassoux and Laruelle. “Meillassoux and Laruelle alike seek to step away from the self-confirming totalizations of correlational thought,” Shaviro rightfully observes. “But whereas Meillassoux radicalizes and surpasses correlationism through an exacerbated form of dialectical speculation, Laruelle instead performs a radical withdrawal from speculation” (129). (And we should note that Laruelle published his first comprehensive attempts to withdraw from philosophical correlation when Meillassoux was about fifteen years old; Meillassoux hasn't addressed Laruelle very much in print thus far, but nevertheless a useful exposé remains to be written on if and how Meillassoux borrows from Laruelle, and if not why not.)

On the question of noncorrelational thought, Shaviro synchronizes with my reading of Laruelle and his strange mode of “autistic” rationality. Shaviro's phrasing is elegant here, he calls it a “noncorrelational sentience” (132). In essence Shaviro is seeking “an alternative image of thought that is nonintentional, nonreflexive, and most often nonconscious: a kind of 'autistic' thought that is not correlative to being but immanently intrinsic within it” (12). Shaviro also references Erin Manning's important work on autism and the relation between neurotypicality (or neuronormativity) and neurodiversity. Not simply defending the notion that autism represents a valid rational regime and thereby merely correcting anti-autistic prejudice, instead Shaviro describes autism as a form of noncorrelational thinking that is at the very least parallel to correlated rationality if not superior to it in some ways. “Autistics are fully immersed in the world, immanently and without relations of phenomenological intentionality. In consequence, they seem to be less incorrigibly 'correlationist' in their basic attunement to the world than neurotypicals are” (132). Or, if we follow Shaviro's logic to its conclusion, autistics are de facto speculative-realistist subjects, because they are less bound by the correlational structure.

After dealing with his first two themes, connectionism and panpsychism, Shaviro reveals the ultimate goal of the book, to demonstrate that ontology is analogous to aesthetics. In other words, aesthetics is first philosophy. Shaviro shares this position with Harman, who has also argued that realist ontology needs to be understood in terms of aesthetic categories. I'll say more about this in a future post, but the gist of it has to do with perception and sensing. Philosophers talk about things called “causal powers,” that is, the way in which things relate, influence, sense, or touch other things. To have a realist theory of causality, then, one must locate such causal powers in the thing itself as opposed to something else like an observing mind. For Shaviro this provides a natural segue back to the theory of affect, a la Spinoza, Deleuze, or Whitehead, because affect provides a way to think about causal relations that are still nevertheless real phenomena. Ultimately Shaviro defines such affect in terms of “contact at a distance” (147) or “immanent, noncognitive contact” (148). (He uses the term “immanent” here to differentiate it from a transcendental model of mediation that would require correlation with an abstract representational model.) Hence, because ontological relation is ultimately about an entity's sensitivity or perception, ontology can be usefully reframed in terms of aesthetics. Still, the notion that “aesthetics is first philosophy” poses a number of new questions, some of which I will try to address in a future post.

Beyond the macro themes of the book already discussed, Shaviro's analysis is also filled with numerous small details and moments of focused analysis. Among them he makes two particular observations that strike me as noteworthy.

First, he shows that Harman is a pan-correlationist, not an anti-correlationist. Harman's exit from the human-world correlation, in which the human is privileged, leads through the structure of correlation itself. Because of this, Harman proposes a “Kantianism without reserve” (70). In other words, Harman seizes on the specifically human relation (Dasein and the analysis of tools from the beginning of Being and Time) and then “democratizes” that relation by disseminating it to all entities. In the end, all forms of being, not just human beings, can lay claim to a rich structure of relation.

Consider the old theological tools of apophatic and cataphatic reason. Shaviro is arguing, in essence, that Harman's critique of correlationism produces a cataphatic non-humanism, in that it proceeds via the affirmation of a known human condition. We know that people have such and such relationship with objects, therefore all objects have that same relationship. In fact I would also categorize Shaviro's panpsychism as a kind of cataphatic non-humanism--we know that people have mentality, therefore all objects have mentality. (Here Shaviro disagrees with my assessment, arguing instead that mentality is natural not human and thus is never cataphatically affirmed by the theory of panpsychism.) Contrast this with the kind of explicitly apophatic non-humanism evident in other speculative-realist thinkers like Eugene Thacker or Laruelle, in which the non-human is achieved via the negation or withdrawal of all aspects of the human, including both Shaviro's mentality and Harman's phenomenological subject-object relation.

Second, Shaviro argues that Meillassoux doesn't provide an adequate explanation for why anti-correlationism results in contingency, as opposed to something else. I've made this case regarding Meillassoux's use of chaos (viz. that there's no particular reason why chaos should follow the suspension of the principle of sufficient reason). But Shaviro states it even more boldly, arguing that Meillassoux's nihilist conclusions are still rooted in the legacy of the bifurcation of nature (77). In other words, only a bifurcated Modern would think that uncorrelated nature is nihilistic and chaotic. A more effective withdrawal from correlation would benefit from a prior withdrawal from the bifurcation of nature.

Catherine Malabou's critique of Meillassoux is also relevant to mention here. In her 2012 SEP-FEP lecture, Malabou questions why contingency should stay the same after the suspension of the principle of sufficient reason? Why export a notion of contingency already branded by worldly correlation? Or, as she asks, wouldn't the very notion of contingency need to be contingent, and thus need to change?

The way Shaviro divides up the field is also interesting. For most topics in the book, Shaviro returns to two basic interlocutors, Harman and Meillassoux. He tends to side with Harman (while offering substantial modifications or corrections), but tends to keep his distance from Meillassoux. Otherwise, despite his magnanimity toward the field, fewer pages are devoted to some of the other speculative-realist authors such as Iain Hamilton Grant, Brassier, and Laruelle, all of whom nevertheless remain interesting to Shaviro. He offers occasional references to new materialism and speculative feminism, citing figures like Manuel Delanda, Jane Bennett, and Karen Barad. Likewise there is very little here on Deleuze and, surprisingly, almost nothing on Bruno Latour. Yet, while this is a book about Harman and Meillassoux, it's not merely a secondary text that documents the various twists and turns of other thinkers. This is a book about Shaviro himself, and particularly the way in which his particular reading of Whitehead might enliven contemporary debates in speculative realism.

Inspired by Whitehead's ontology, Shaviro writes that “our fundamental condition is one of ubiquitous and inescapable connections. We are continually beset by relations, smothered and suffocated by them” (33). Indeed, while more or less endorsing such relations, Shaviro also is upset by the pervasiveness of connectivity in contemporary life. Rarely one to succumb to sentiment or romanticism, Shaviro nevertheless reveals his anxiety about the ubiquitous connectivity of contemporary life. “For me, then, the great metaphysical problem is how to get away from these ubiquitous relations, at least in part, in order to find a tiny bit of breathing room. [...] To my mind, relation and causal determination are our common conditions and maladies, and self-creation or independence is the rare, fragile, and extraordinary achievement that needs to be cultivated and cherished” (34). A tiny bit of breathing room, or a lot? Connectionism or withdrawal? Or does the debate secretly lie elsewhere? Perhaps it lies out beyond the limits of intelligibility, where entities sense each other mentally without recourse to intension, reflection, or orientation.