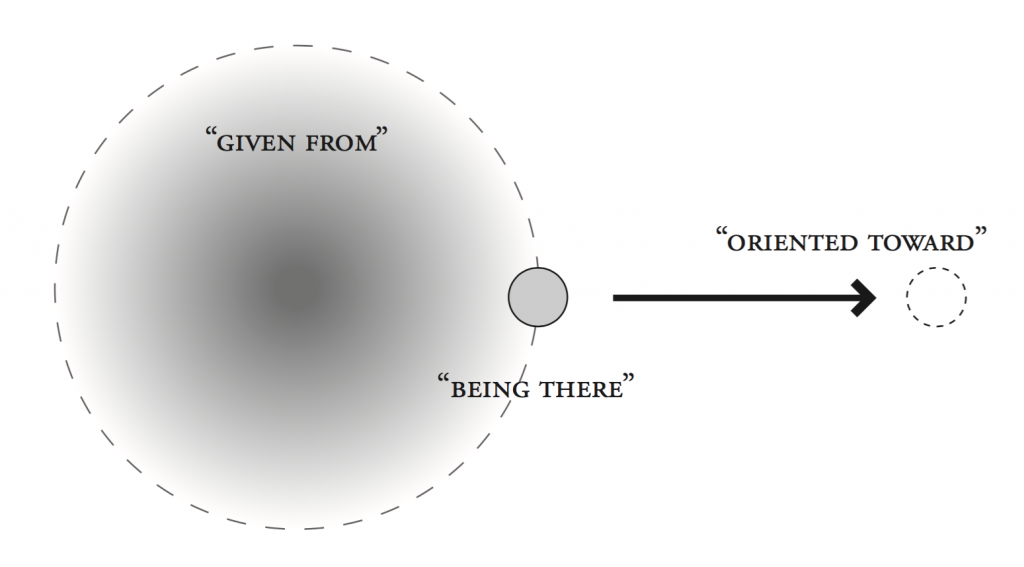 From an area to a point, the circle engenders a dot. A derivation entails an identity, and a dot appears at the perimeter of the circle. The dot is a point or a position. Dative, the dot is a fixed point at which things gain definition. A datum, the dot means “being at” or “being there.” As with Heidegger's Dasein, the dot specifies existence or presence in the most straightforward sense. What was given from the circle, is now given at the dot. Not simply from-ness but at-ness, the at-structure.

By emerging from out of the circle and being located at a precise point, things gain an intention. Oriented, the dot gains a direction. Oriented, a thing becomes an arrow. Accusative, like a vector with its direction and magnitude, the arrow identifies a goal or cause. Aiming, the arrow triggers an action. The arrow makes its own objects, makes the world as a world of objects. Toward-ness, the arrow means “acting on” or “acting toward.”

The circle, the dot, and the arrow define what it means for an entity to be given into a world and gain a spot and orientation within it. The entirety matters most. When considered in isolation, each exhibits a specific, absolute condition. The absolute circle conjures all manner of spiritualisms and theologies, from grace and essence to affirmation as such. The absolute datum furnishes the journalism of the world, from empiricism and pragmatism to all the other sciences of description. The absolute orientation produces a multitude of machines, each mobilizing and processing according to its own alignment.

These are the three in absolute isolation. But when taken together, the circle, the dot, and the arrow form something remarkable. They form philosophy. They form the world. They form the human being.