I'm pleased to announce the publication of a new book, Laruelle: Against the Digital. My position is a bit idiosyncratic. Rather than offering a synopsis or critical annotation of Laruelle's work, the book aims to collide Laruelle's non-standard 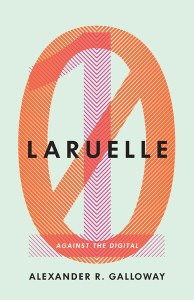 I define digitality as a process of distinction. Thus I see an immediate resemblance with Laruelle's notion of the Philosophical Decision. Philosophy and digitality both require a fundamental act in which something is divided into two. For example metaphysics requires the notion of a division between essences and instances. And on a computer chip data is modeled and processed by means of voltage differentials. This fundamental action is important: distinction, division, decision, or discretization. Not so much the proverbial “zero and one” of computer culture, I'm focused here on “one and two,” or what it means to move from one to two.

We know that thought can be understood digitality, that's the easy part. Philosophical rationality has worked that way since Plato, and so does a computer. (So called "digital" philosophers like Stephen Wolfram merely reiterate a basic observation, because there is no other philosophy than digital philosophy.) The hard part is to speculate about a withdrawal from the digital decision.

In this sense the book is nothing but a massive thought experiment: is it possible to think non-digitality? My answer is the same answer given since time immemorial: Yes. But we need immanence and materialism to accomplish it.

In essence I suggest that we must be rather simple-minded about the one, taking it at face value and combining it again with its binary companion, the zero, in order to collide Laruelle with contemporary discourse on digitality.

Laruelle almost never talks about the digital, it is true, yet I see evidence of the topic on almost every page. The book's goal, then, is not to forge a new digital Laruelle (or, for that matter, an analog Laruelle), but rather to show how, even in this day and age, Laruelle remains a profoundly non-digital thinker, perhaps the only non-digital thinker we have.

There are several references to the digital in his work: the short essay on “The Transcendental Computer,” the occasional references to computers, matrices, algebra, and calculation in some of the late work. In fact, the digital logic is deeply rooted within the core of philosophy, Laruelle claims, and it is the goal of non-philosophy to unilateralize the digital decision and withdraw from it:

The duality of the discrete [numérique] and the continuous, of the mathematical and the philosophical . . . is a constant throughout history and permeates all of Western thought. The discrete regularly claims victory, even as the continuous continues to survive. . . . Non-philosophy is, among other things, a way to register this survival without pretending that one side will crush the other. Rather, non-philosophy connects each to an instance that is neither the continuous (dominant in philosophy) nor the discontinuous (dominant in science). (“L’ordinateur transcendantal,” 13)

The digital computer “is endowed with the capacity for synthesis, connection and communication, interfacing and exchange, all of which are inherently philosophical or world-bound,” writes Laruelle, explicitly linking computers and philosophy. “Hegel is dead, but he lives on inside the electric calculator” (Introduction aux sciences génériques, 28).

So that's part of what I'm trying to do in the book -- to talk about the one (but also the two and the many) as a way to connect Laruelle directly to contemporary digital culture.

Of course it is technically incorrect and certainly overly simplistic to assert that Laruelle is “against the two” or “for the one.” The subtitle of the book “Against the Digital” is not strictly in accordance with the non-standard method, I'll admit. Laruelle thinks that philosophy generally enforces a “law of the two” based in bifurcation, reflection, auto-position, etc. Yet non-philosophy cannot be understood as a simple rejection of the two and a return to the one. Laruelle describes non-philosophy as a theory of the immanent one and the unilateral two. This preserves a notion of the one that is not transcendental, and a notion of the two that is not representational.