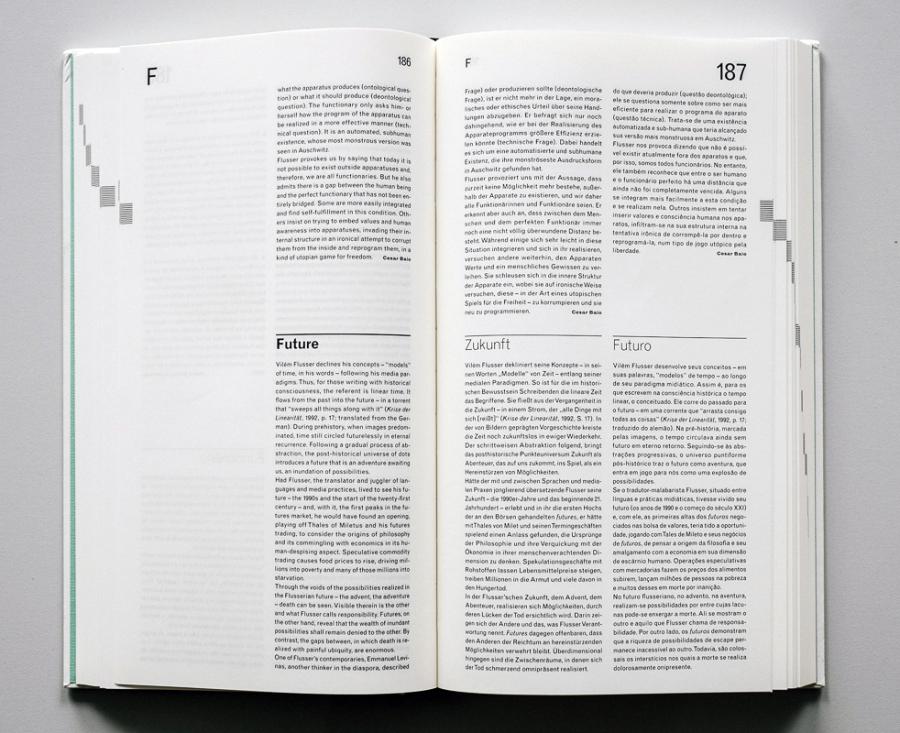 A lovely item arrived in the mail today, the Flusseriana, a large and engrossing volume that explores the intellectual landscape of the late, great media philosopher Vilém Flusser. Structured roughly like an encyclopedia, the compendium contains a few hundred entries, from "abstraction" to "zero-dimensionality," by way of "Buber, Martin," "Hypertext," and of course, "Vampyroteuthis Infernalis." Many contributing authors helped produce this volume, which was edited by Siegfried Zielinski and Peter Weibel, with Daniel Irrgang, and published by the good folks over at Univocal in a tri-lingual English-German-Portuguese edition. (Flusser knew Portuguese, along with several other languages, and lived in Brazil for many years.)

The entries in the Flusseriana are all short, and part of the challenge was to discuss complex topics using few words. I elected to write two entries, one on "interface" and the other on "phenomenology."

Given their role as differentiators, interfaces exist in relations that are systemic, layered, or nested. To facilitate such systemic architecture, interfaces require intricate codification and regulation. Interfaces are zones of exchange and as thresholds they are productive and generative. Yet as regulators, they also restrict or delay passage. Hence interfaces display a dialectical tension between the immediate and the arcane, the clear and the complicated, or the evident and the inscrutable.

Yet interfaces are not simply thresholds, they are also surfaces or screens. As Flusser said, an interface is a “significant surface.” Thus in addition to being a zone of decision that facilitates exchange and passage, an interface is also a “'zone of indecision’ between the inside and outside” (Gérard Genette). Not just doorways, interfaces also have their own internal reality; they support an autonomous aesthetic space. Edge and center combine within the interface binding together the frame and the work. Interfaces thus link both inside and outside.

Phenomenology is one of the core methods of inquiry in nineteenth- and twentieth-century continental thought. It emerges as a response to the crisis of European modernity, particularly the positivistic tendencies of modern rationality. Phenomenology views such rationality--from industrialization and capitalism, to the modern polis be it individualistic or fascist--as essentially alienating. "Man . . . does not dwell in the world,” wrote Flusser. “He is an intruder."

Disclosing an underlying Hellenism, phenomenology professes to see things as they really are by way of the revealing of the truth of the world. The “phenomena” are the things that show themselves, and hence phenomenology indicates the self-revelation of things to a solicitous subject.

Influenced by the "radical phenomenology" of Husserl and fascinated (and repelled) by Heidegger, Flusser proposes that philosophical inquiry can and should begin with a subject's own experience. Objectivity, to the extent that it exists, is a byproduct of the immediate reality of experience. The goal is to rediscover the subjective realm, recasting it in rigorously philosophical and newly scientific terms. Hence phenomenology focuses attention on both questions of presence or being in the world and the subjective nature of such presence.

The relation between subject and world is paramount, with the subject extending itself into a world by way of innumerable objects and devices. Flusser recounts a phenomenology for buttons and bottles, images and text, gestures and interfaces. The existence of such devices and techniques results in a moral distinction between authentic and inauthentic experience. Phenomenology thus prizes authenticity and sincerity above all, as the subject takes care to avoid falling into inauthenticity by engaging in an authentic life project.